Day 2 folks, time to do the work.  I’m jumping in with a big one.  Yesterday was amazing and I loved being part of it.  I saw many women who had never protested before putting themselves out there and taking their first activist steps, which was beautiful.  But it’s important to remember that this is just a first step.

There’s an image that has been making the rounds on the internet. 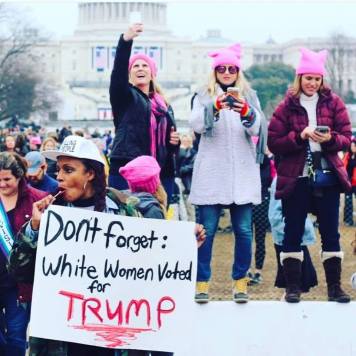 This is a great photo that encapsulates a very important point that allowed white women to vote for a man who has espoused sexist, racist, and ignorant views.  A huge part of the ability to make that choice comes from the privilege that white women have in society.

I first learned of the concept of privilege when I was a freshman in college.  It abhorred me.  I didn’t ask to be born as a white woman.  I wanted to give it away, get rid of the privilege.  But you can’t do that.  And really, saying that you want to is disingenuous.  Privilege makes life easier.  That’s the entire point.

There are a few pieces of literature I read during that time period that literally blew my mind.  One is “White Privilege: Unpacking the Invisible Backpack,” by Peggy McIntosh.  Please read it, and sit with it.  If it makes you uncomfortable or defensive, sit with that too.  If you don’t believe that privilege exists, here are the ways that I see and experience privilege in my own life.

Any of that ring true to you?  That’s what privilege is.  Men didn’t ask for the privileges but they get them anyway.  They cannot give them to you even if they wanted to.  Now let’s talk about race.

As a white woman:

You cannot underestimate the impact of privilege.  These lists are not exhaustive, and were just things that come to mind easily.

It does not matter if you did not ask for these privileges.  You cannot change the fact that they exist, just as people who are not in positions of power cannot change what they look like.  Everyone has different privileges, and the different things we bring to the table lead to our intersectionality.

White women have let our black and brown sisters down time and time again.  We pushed them out of the suffrage movement.  We sacrificed their civil rights for our own advancement.  We ask them to show up and fight for us, but we have not shown up or fought for them.  They showed up.  Only 4% of black women voted for Trump.  A staggering 53% of white women voted for Trump.  Where were we a few months ago?  Complacent?  Disillusioned because of leaked emails?  Were we lazy?

Let’s quote Spiderman.  With power comes great responsibility.  Privilege is power, and we have a responsibility to use that privilege.  I stand with my sisters and am working on being an ally every day.  If you are interested in being an ally, start doing the work.  Sit with the concept of privilege and let it make you uncomfortable.  Start getting active, even if it’s not the cause that affects you directly.  If you want to learn more about being an ally, ask your friends who are already doing the work.  Do not burden your black and brown sisters or make them explain things to you.  They have enough on their plates, and it’s our responsibility to show up for them.  We’re all in this together, and it’s time we start taking responsibility and acting like it.  I don’t have all the answers and I’m working through it every day, but I’m happy to work through it with you.

One more thing.  It’s not enough to sit back and let things happen around us anymore.  We cannot be complacent.  Complacency got us here, and we won’t stand for it anymore.  The millions of women who took to the streets yesterday made that very clear.  Be an active ally, not a passive bystander.  We all lose when we let injustice happen on our watch. 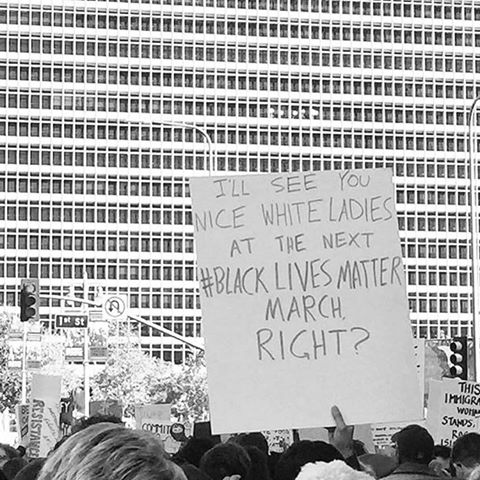 One reply on “White Privilege”

[…] that note, let’s dive in.  We previously discussed privilege a little bit here.  Feel free to check out that post for a high-level view of privilege.  Today we’re going a […]