It’s clear that JoJo and Jordan have chemistry.  Unless something disrupts their love story (ahem, like a cheating allegation), these two seem to be on the path to the final rose ceremony.  I’m worried about JoJo, though.  Despite allegedly learning so much from her time with Ben Higgins, the former Bachelor who showed her what she was worth, she seems to be picking men just like Chad.  Chad the ex-boyfriend, not Chad the ex-contestant.

Let’s dig a little into what JoJo has said about ex-Chad.  During the last season, JoJo told Ben that there was another person in her ex’s life, alluding to cheating.  On her date with Jordan, JoJo explained that with ex-Chad, there were “high highs” and “low lows,” and that her insecurity was “insane.”  You don’t have to extrapolate too far to understand that JoJo had some trust issues with ex-Chad, likely involving cheating. But that’s not what other people saying.  On the show, we’re treated to some commentary from the men.  When Jordan got the 1-on-1 date card, it was silent.  Wells said that he was upset it wasn’t him, and that Jordan is “playing the game to get a stamp on his passport.”  I’ve never heard that one before, but I can imagine what Wells is getting at.  Derek says he’s not going to stereotype football players, but if there’s one person on the show he would question, it would be Jordan.  A bunch of voiceovers follow, saying that people don’t trust Jordan and that he’s not there for the right reasons.

But even if you put what Jordan’s competitors say about him aside, JoJo herself questions Jordan.  She tells Jordan that she met one of Jordan’s “on-again, off-again” girlfriends, who told her that Jordan was not “the best boyfriend.”

Jordan taking a sip to stall the conversation, classic move.

Once confronted with this, Jordan stalled, said he didn’t know what to say, and then blamed it on sports.  He said that he was going through a lot trying to be the best at sports, and that he took it out on people.  This girlfriend was “along for the rollercoaster” when Jordan was “at his best and worst.”  Notice how he mirrors what JoJo had previously told him about her relationship with ex-Chad, with highs and lows.  Interestingly enough, Jordan says there was no physical cheating.  That’s not what his ex-girlfriend says: 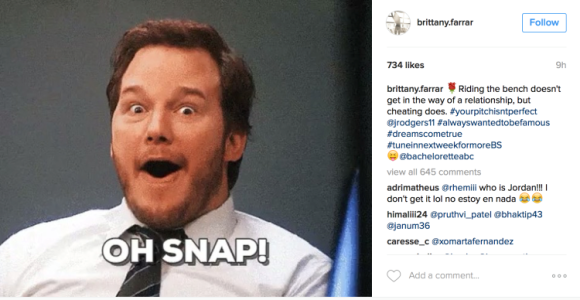 EDIT – The Pitch Perfect reference was about his cameo in the movie, NOT cheating.  He cheated with someone else.  Thanks Laura for the correction!

Listen.  I like Jordan, mostly.  I think he adds something to the show beyond Villain-Lite.  But regardless of whether these allegations are true or not, Jordan’s reaction the next plot point – the tabloid fiasco – was extremely manipulative.

Somewhere in Uruguay (perhaps in a producer’s bag??), Vinny got his hands on a “gossip rag” that had an interview with ex-Chad.  Chad said that he and JoJo rekindled their romance when JoJo was home after Ben’s season.  Whatever, no big deal, except the producers obviously gave this magazine to the contestants, and then confronted JoJo about it, and made her go talk to the guys.

JoJo goes to see the guys, who, by the way, are not at all surprised to see her, which just shows more producer involvement, and explains her case to them.  Through her tears, she tells them that the allegations were untrue, and explains more about her relationship with ex-Chad, which sounds like a nightmare.

Jordan’s first reaction to JoJo’s story was to conflate the conversation they had during their 1-on-1 with JoJo’s situation.  In Jordan’s mind, being accused of cheating is the same as having a vindictive ex take you down in a magazine for a bit of money.  Jordan actually says that the two of them had just gone through a similar conversation about an ex spreading lies that aren’t true.  No, Jordan, they are not the same.  JoJo is the victim, and you are the alleged perpetrator, and your ex told JoJo in private, and honestly, it rings true.

I hope for JoJo’s sake it’s not, but by aligning himself with JoJo against the exes who want to take them down, Jordan has placed himself in a position to easily deflect anything anyone says about him, and has already shown his ability to manipulate facts to make it seem like he and JoJo are both dealing with the same thing.  This will make it even harder for JoJo to piece the truth together, even when faced with facts.

I’m sure this story isn’t over.

On a lighter note, this week we lost a true character – Damn Daniel.  In honor of Daniel, here are a few of my favorites:

Daniel eating during one of the Chad altercations.

When Daniel was the most Canadian.

When Daniel got down on himself after he didn’t get a rose.

Maybe we’ll see you in Paradise?

As always, my frontrunners:

2 replies on “History Repeats Itself”

I get it. I don’t think he’s terrible either, at least from what we’ve seen so far. But I have CONCERNS.