This season so far has been a petri dish for masculinity and all the forms it can take.  I have never seen a season so focused on what it means to be a man, what strength is, and how a man should interact with a woman.  Or a girl, as Chad loves to say.

Evan, the erectile dysfunction expert, is an interesting case study in what happens when someone is exposed to a house full of men, with no distractions.

But views his housemates doing this:

At the beginning of this episode, Chad refuses to even engage with Evan.  When the group date card comes and Chad makes comments about how he does not want to go on a date with 12 other guys,  Evan speaks up and is immediately shot down.  Juxtapose Chad’s reaction to Evan with his confrontation of Jordan.  Chad views Jordan as a threat, or at least a worthy opponent, but Evan does not even register to Chad.

Evan decides to make a stand and call Chad out during the group date, leading to altercation #1.  Watch Evan slide past Chad:

I think Chad might have a point here.  Evan does seem to elbow Chad.  Does that justify Chad’s subsequent actions?  Absolutely not.  But it’s important to this plot point.  Evan succeeds in getting on Chad’s radar after his public accusation that Chad takes steroids, leading to altercation #2: 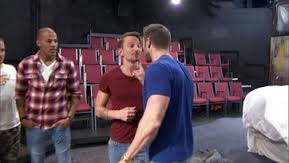 Let’s skip to the after party.  As part of Evan’s evolution, he tells JoJo that “a big part of this process for me is realizing I haven’t been as strong as I should be,” leading him to give JoJo an ultimatum – it’s either Evan or Chad.  Evan returns to the group and tells them that he has been “stronger tonight than I’ve ever been.”  In Evan’s mind, his lesson is that he has not been strong enough and that he needs to take a stand with JoJo in order to have that strength.

In this battle, Evan gets the rose, and Chad gets embarrassed.  Evan wins, but it’s unfortunate that he feels he should even be playing the same game as Chad.

As a gender studies major, I took a class called “The Masculine Mystique.”  It was one of my favorite classes – not just for the alliterative title, but because it was one of the few gender studies classes with a healthy number of male students.  Masculinity studies is one of the potentially lesser known strands of gender studies, and it is easy to dismiss the idea by falling into rhetoric about privilege.  But it is impossible to unpack societal norms about gender without discussing how those issues affect men.

I don’t know Chad, and I don’t know his background.  It seems like he’s going through a lot, and I don’t doubt that some of his actions are producer-driven.  For example, in the previews for next week, Chad reappears at the house after he’s been kicked off the show.  This has never happened before, and could not have happened without producer assistance.  But notwithstanding those external factors, it is clear that Chad has internalized certain ideals about men that are damaging.  He is unable to engage in conflict without resorting to violence.  When faced with a conflict, his response is: “If I can’t lift weights I’m going to murder someone.”  He cannot comprehend that someone “like JoJo” would want someone like Evan, who is the ice cream to Chad’s steak.  Chad doesn’t know anything about JoJo besides what she looks like, and from that he has determined what she wants and needs, which is a huge issue.  It turns out that Chad isn’t even Chad’s real name.  His name is Brian.  Brian has morphed into Chad, who is a case study in how strict constructs of masculinity can have a damaging effect on our boys and men.  And it’s catching, and it caught Evan.

Small shout out to Derek here.  Derek was the only man in the house who was able to have a clear, firm conversation with Chad without resorting to posturing, threats, and similar forms of peacocking.

And with that, we say goodbye to Chad.

Behind the drama, we see a few relationships developing.  My list for the week: